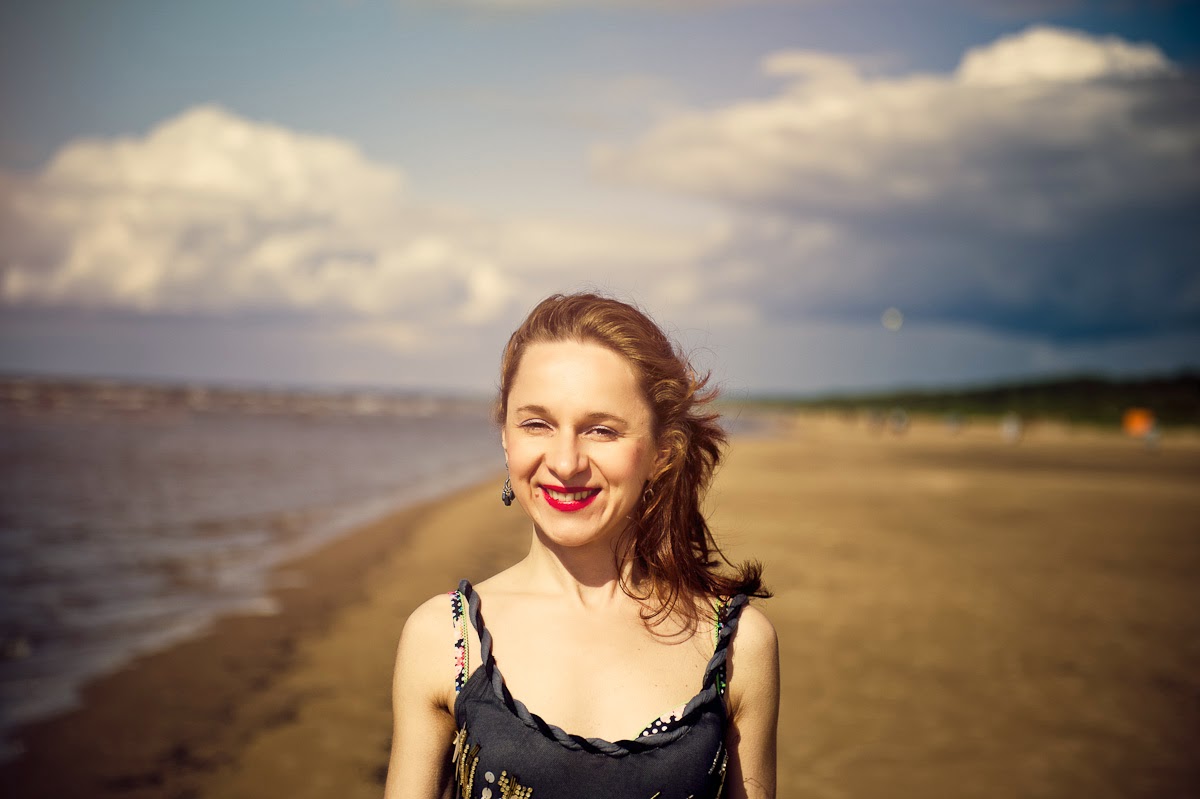 El mirollo de l'arbore contains an excerpt from Dialogues, the best -known work of the 14th century mystic St. Catherine of Siena. She was one of the most educated and intelligent women of her time, and she had the ear of bishops, cardinals and even the pope, whom she persuaded to move the papacy from Avignon back to Rome. St. Catherine's cosmic text should not be linked only with Catholic religion. It is an associatively poetic message about love, humility and caution, which each listener may understand according to his or her own experience.

In Silsila (chain in Arabic) we are following the Brahmaputra river down streams from Tibet, through India and Bangladesh to the Bay of Bengal. It is the highest major river in the world, which starts as a tiny little spring in Angsi glacier in Himalayas. In the curse of the piece we are descending from 5210 m above the sea level. In the South of Tibet this river is called Yarlung Tsangpo river. In The Arunachal Pradesh state of India the river descends very rapidly from its original height and it is known as Siang. It flows southwest through the Assam Valley as Brahmaputra, where it becomes very wide. Then it flows towards the South, through Bangladesh, as Jamuna. In the wast Ganges delta it merges with Padma river, then with Megna river, before emptying into the Bay of Bengal.

In the sounds of music I tried to stop at that imperceptible instant where Ziedonis gently and softly, just in a few lines of poetry included the knowledge given by Nature.

The piano is like a moisture, just sensed on your skin - so lightly and tiny, so fine  and grey. The rain...  Like a tissue of harmonies, and at the same time -  foundation and fulfillment of everything.  The melody  of voice, cello and flute in one gasp twine around piano till the chords of the piano symbolically tails of in one note.

The composition Ondulado is meant to be like a dream in which one awakens from a previous dream... a continuous flow of abstract things, events, thoughts which find their expression in sounds – eternal sounds because they existed before memory. One guitar continues to ondulate in the previous guitar`s current, and this in turn gives new energy to the next guitar... The piece was inspired by Lunar Mare (Moon seas) which are dark, vast plains on the moon formed by ancient volcano eruptions which the first astronomers took for seas. Looking with the naked eye these plains look darker than the highlands because the iron in their makeup doesn`t reflect light as intensively.

Each part is named by mare names which are very inspiring, as well as the photographs of mares on the Moons surface, showing different sizes and shapes of mares, sometimes ornamented with deep basalt-flooded craters or having irregular outline. Or sometimes there are small circular and elongated features in the mare plains that probably mark impact craters buried by less than 1000 to 1700 feet of lava. Some mares are  noticeably darker than the rest of the Moon's surface.

In Muqarnas I imagine myself hang on around the streets of Shiraz and admiring the Islam architecture. Muqarnas is one of the most characteristic features of Islamic architecture and is used throughout most of the Muslim world. it is a system of projecting niches used for zones of transition and for architectural decoration. The development and multiplication of muqarnas cells beneath the domes can be understood by their function in reflecting and refracting light. To accentuate their play of light, shining ceramic tiles and even mirrors are utilized, as in the Shāh-Hamza 'Alī mausoleum in Shiraz. Two Persian love songs will be hidden in these architectural decorations: Masnavi and Setereh-Asemun.

libellules, 2009 for clarinet and cello

In libellules for clarinet and cello I was looking for a way to sense a particular dual phenomenon in Nature through sound, which in this case was incited by the interplay of two musical instruments. Dragonflies and water. What makes these delicate flaying creatures with translucent, fragile wing always return to water? What invisible strings connect the pulsating of light silvery waves with the ceaseless movement of wings streaked with light? What reflections, imperceptible to human sight, make them race toward the surface of water? The clarinet and cello duet does not illustrate this attraction between dragonflies and water. Rather, it reveals the transformation of one into another. The slow swaying of water is combined with the creature that swims in waves of air; and the low, darkly saturated, quiet tones of the clarinet are merged with the cello, uncovering the languid line of the water`s surface. Fanned by sharp sun rays, the unceasing wings are echoed in wind-split, rhythmic reflections on the water; and the high, shrill sound of the clarinet breaks the flagieolets so unusual to the cello. The bright, translucent water glitters in almost invisible silken wings, he water rises up in flight, and the dragonfly dives down into the depths…

Hummingbirds are the smallest birds of the world. In this piece I wanted to observe the world of this little bird`s-eye wieve. I listen to a  very soft and humming sounds produced by rapidly flapping their wings up to 80 times per second. I follow the unbelievable sound trajectories which let this tiny creature hover in mid-air and even fly backwards. I gaze at vivid colours of the hummingbirds, hardly separated from wonderful blooms. Crystalline sound of harp will flood in colourful accordion timbres. Violoncello will sing the voice of birds` heart which is the biggest heart comparing to the little body. Their heart rate can reach as high as 1260 beats per minute in the day and only 50–180 beats per minute in the night. Hummingbirds are capable of slowing down their heart beat and enter a hibernation-like state known as torpor. During torpor, the heart rate and rate of breathing are both slowed dramatically.

The title of the composition Chants des Dunes (Singing Dunes) has originated from a mysterious phenomena of Nature, known from Marko Polo times – an extraordinary  skill of  some dunes to  sing - to emit  a powerful sound of easily defined frequency. Sometimes the process lasts for a few minutes. The origin of this consistent sound has not been investigated yet, so that it occurs very rarely. However, it has been observed that the sound is not created by  the flow of the air around the top of the dunes, but it occurs due to  the flow of  the sand; that means – it is not created by acoustics but by the movement of sand grains.Comparing the ‘singing dunes’ in the different parts of the world, it has been proved that the frequency of the sound is equivalent to the frequency of the  relative speed of the sand grain movement. The sound is provided because sand grain movement is synchronous. In my imagination  I can  associate numerous kinds of  percussion with the  sound of flowing sand. Overlaying it  with a filigree  sound of  the organ it is possible to create an extraordinary brilliance of sand.

The word räsä has originated in Java, Indonesia. It has many similar meanings with Sanskrit ‘rasa’ that means taste, essence... In the musical context  in Indonesian  Gamelan music räsä most often reflects the state of  mood or  affect. It can also be related to perception, inner meaning, deeper insight or intuition.

On contrary to Indian ‘rasa’ theory, which is coded (has its specific meaning), in Javanese Gamelan composition räsä is unpredictable, its essence is blooms only in specific circumstances - musicians, audience, place, time, food, rituals... There are no two similar Gamelan compositions. However, considering the fact that these compositions are so flexible and indefinite, to what extent do they depend on the piece itself and to what extent on  the unique  performance of musicians? It is not always guaranteed that the particular performance reflects the true, clear, pure räsä.

Alvéoles is inspired by different colours, textures, densities and tastes of honey. The main idea is to sense the nature of honey which is very sticky and stringy like united play of strings. The form of the piece arose from the six-angled (hexagon) shape of honey cells where many sounds flows out from one unique sound reflecting the touching points between the other cells beside (in the first section). The next sections reflect the various kinds of honey from a very light and transparent flower honey till dark and dense forest honey. The final section of Alvéoles shows the process of crystallization of honey where the larger honey crystals are shaped by many little crystals.


String quartet  Aragonite was created after traveling to caves in Slovakia in summer 2005. The  composition was inspired by  miraculous natural phenomena - aragonite crystals, found in the concealed underground cliff passages. It`s unthinkable that Nature can  create something that beautiful that   is hidden  in the bowels of the Earth. The floral design transforms into twig pattern and  peculiar stalactite figures,  called floss-ferry or iron flowers. I was taken by the immensity of thousand years long formation process of aragonite stalactites that felt timeless.  Because of that the form of composition develops  as a slow, continious movement, reflecting  delicate, subtle inner changes.

The idea of sens nacre is not to contrast different instrument groups, but to integrate and mix them. Timbre and harmony organically flow, creating an intangible nacreous feeling. Everything begins with silence. Look for it deep inside yourself, since the environment is not always silent enough. At the outset silence illuminates sounds, one by one. Silence balances sounds, no to overwhelm each other by loudness but to equal each other in softness. A variety of tones from instruments unite to produce shades. Kokles/harps melts with marimba, accordion softly reflects the sounds of the oboe and clarinet. Percussion makes it glitter like nacre and strings blend the colour.